FANS 1A – What is it and Why is it Important?

Home/industry reports, NextGen/FANS 1A – What is it and Why is it Important?
Previous

FANS 1A – What is it and Why is it Important?

Aircraft that are flown internationally need to be sufficiently equipped to allow them to fly within airspace allocated to Future Air Navigation Systems (FANS).  The most highly used FANS airspace is over the North Atlantic Ocean between North America and Europe.  Currently there are approximately 1400 flights per day that use the North Atlantic Tracks (NATs).  NATs Air traffic is increasing at roughly 5% per year.  The current NATs airspace is approaching saturation.  Please see the NATs video at:
https://www.youtube.com/watch?v=6pI77r3oAxw

There are several groups of airways — or “tracks,” as they’re called in traffic control — that pass over the ocean and are grouped like multi-lane interstates. For the sake of simplicity, let’s take a look at one of the most popular and heavily trafficked group of oceanic tracks, known as the North Atlantic Tracks — or the NATs — which exist between North America and Europe, in both directions.

Most airline flights leave North America for Europe in the late afternoon or evening, arriving early in the morning. Similarly, most airline flights leave Europe in the late morning or early afternoon, and due to the time change, arrive in North America only a few hours later. Based on prevailing winds and weather, the actual location of the NAT Tracks along these transoceanic routes change twice a day in order to minimize headwinds, and maximize tailwinds.

Prior to departure, dispatch personnel or the flight crew check the current position of the NAT Tracks and take into account the flight destination, as well as the aircraft’s type, weight and planned speed. They then submit a request to enter a specific track at a certain time. Their request is submitted to one of two air traffic control centers — Gander Center in Newfoundland, Canada or Shanwick Center in Ayrshire, Scotland — which are responsible for compiling and organizing all requests in order to assign standard separation of aircraft along the tracks.

There are multiple NAT Tracks. Each has its own entry and exit points and each has a lateral separation of at least 50 miles. These tracks are generally usable between FL290-FL410. Using the standard enroute vertical separation (RVSM) of 1,000 feet, this spacing provides 13 different altitude strata per track.

While standard enroute longitudinal separation in a radar environment is only five miles, the imprecision because of the lack of radar creates the need to keep aircraft on the same route and at the same altitude separated by 10 minutes of flying time. Based on a cruising speed between Mach 0.75 – 0.86, 10 minute spacing equates to around 84-97 miles of longitudinal separation.

While ADS-C communicates data via the aircraft’s Satcom system, Spaced-Based ADS-B will broadcast data in the same way it does over populated areas, but utilizing satellites as part of the infrastructure.  The next-generation of Satcom satellites are expected to include space-based ADS-B In and Out capabilities.  Multiple vendors’ system proposals are currently being evaluated.

Currently the FAA provides Departure Clearance Service at 55 airports via Controller–Pilot Data Link Communications (CPDLC).  The aircraft communicates directly with the control tower (like “texting” on an iPhone).  The flight crew logs onto the network when departure time is less than 30 minutes away.  They stay logged on for any changes (such as wind shift), even while taxiing.  CPDLC departure clearance benefits include:

Cost of FANS 1A Non-Compliance

Figures 1 and 2 provide examples of east-bound and west-bound flight paths for non-compliant FANS 1A aircraft (purple tracks).  It may be obvious that these flight paths are both longer and do not take advantage of the jetstream (east-bound). 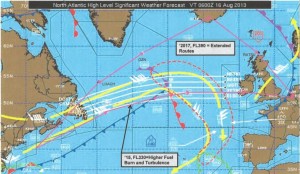 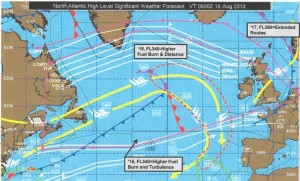 Four Satcom systems and vendors are currently being evaluated by The European Aviation Safety Agency (EASA) for certification and authorization to provide Satcom services for FANS.  A decision is expected by December 2017.  Implementation of FANS 1A is complex and fairly expensive for business jets with international range and payload capability.   It is highly recommended that operators of aircraft considering FANS 1A implementation seek expert advice and counsel on system selection and installation.

Please feel free to contact the author at acraig@avrisk.net with questions or comments, or for assistance with your FANS 1A implementation.

Alexander Craig is Managing Director at AvRisk, an aviation business advisory firm.  Mr. Craig has been a senior executive and engineer at a number of Aerospace and Defense companies over the past 30 years.  He holds ATP and CFI certificates and is an active pilot for the U.S. Air Force Auxiliary, Civil Air Patrol (CAP).

About the Author: AlexC

Alex is co-founder and Managing Director of AvRisk. He has over 30 years of executive leadership experience in Aerospace, Information Technology, Insurance, and Manufacturing. His corporate career includes senior executive roles at a number of large and mid-size companies including: Honeywell International, Rockwell International, Williams International, Raytheon, Federal Signal Corporation, and Progressive Insurance. Alex has also been CEO of a number of start-up companies including: Craig Research, BELIEVEin, Stratos Aircraft, ECCO Systems, and most recently AvRisk. Early in his career Alex was a consultant with McKinsey & Company. Alex holds a BS Degree in Computer Science and Electrical Engineering from Michigan State University, and a MBA from Wayne State University. Alex is an active pilot and holds Air Transport Pilot and Certified Flight Instructor certificates and is a certified Lean / Six Sigma Greenbelt.